Grip-Lock™ Chock is the best performing and most durable vehicle securement & protection system on the market.

Beginning in 2006 the automobile and railroad industries determined that the evolution of vehicle design was forcing a change in how vehicles should be secured on railcars. Consumer trends and fuel efficiency initiatives were driving vehicles to be designed with reduced underbody clearance and lighter vehicle suspension components and body structures. At the same time, the range of vehicle sizes and weights increased, resulting in much larger and much heavier vehicles that needed to be protected in transit just as smaller and lighter vehicles were. In addition, the auto industry requested that a wheel load-limiter (fuse) be incorporated into new securement designs in order to mitigate the risk of over-restraining lighter vehicles and under-restraining heavier ones.

Improvements in railcar handling alone could not overcome these new challenges. The current securement systems were not performing optimally on newer vehicles and vehicle clearance issues were becoming problematic with both tri-level and bi-level rail cars. A next-generation universal securement system that would accommodate modern vehicle design characteristics was required. By incorporating what had been learned from ongoing testing, development, and evolution of the Grate-Lock® Chock System, this new industry need would lead us to design and develop its successor, the Grip-Lock Chock system.

Read about the evolution of the chock

“The lightest chock on the market and it fits well into the grating.”

“The installation of each chock is fast and easy.”

“There were no clearance issues with the vehicles.”

“Holden is easy to remove and store.”

The Introduction of The Grip-Lock™ Chock System

In response to the emerging market need, we developed The Grip-Lock Chock System. The chock’s profile in the wheel-well area allows for maximum clearance between the vehicle and the chock. The Grip-Lock Chock also automatically adjusts toward and grips the tire, further protecting vehicles during transport by increasing clearance while reducing longitudinal movement during impacts. 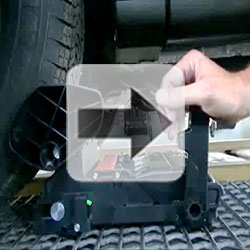 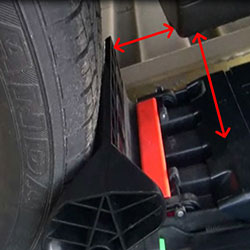 Allows for maximum clearance between vehicle and chock 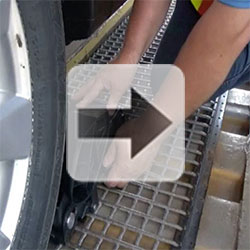 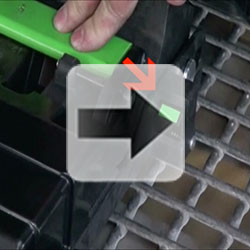 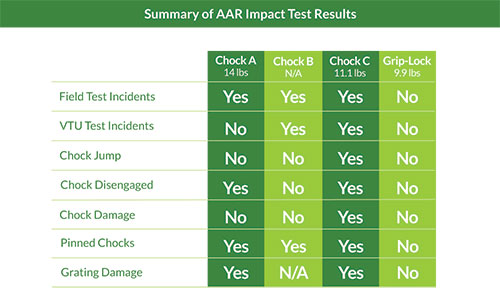 Automobile securement on railcars is made up of a “system” of components which all affect the ability of the chocking device to secure and protect the vehicles and the corresponding system components. No one system component should be altered without first considering the possible impact on the other components within the system. The underlying Grip-Lock Chock System design principles take all of the following components into account. Strengthening one component could adversely affect another if all of the system variables are not taken into consideration. Our design philosophy optimizes the securement of vehicles, while ensuring that all the corresponding system components are simultaneously protected. 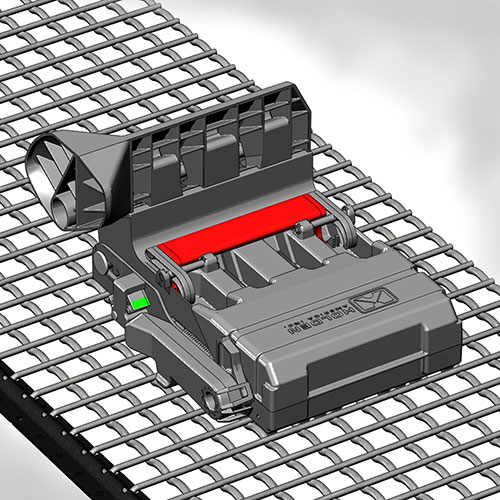 Skillfully Designed to Benefit Everyone

For Railroad and Auto Terminal Operations

Well tested and proven to be the safest auto-securement and protection system in the market.

Talk to someone today about the Grip-Lock Chock System. 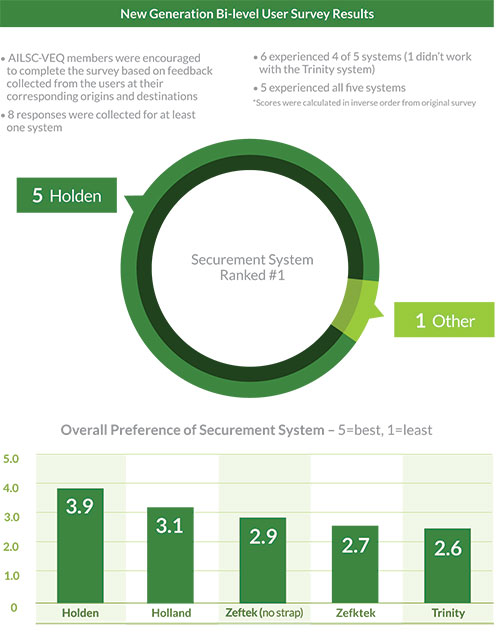 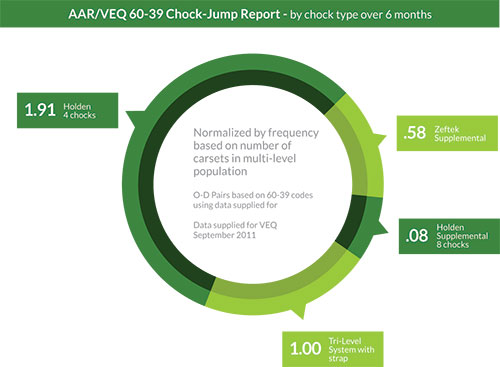 The Evolution of Securement Systems

From 1958 until the late 1980’s the rail industry relied on the 4-point chain tie-down system for securement of vehicles on autoracks.

The drawbacks of chain securement were significant. Chains were labor intensive and difficult to apply. Reinforcement of the vehicle underframe required for accepting chains added up to 60lbs of weight to the vehicles and the application of the chain tie-downs required heavy tools that would routinely cause damage to the vehicles.

More importantly, vehicles shipped using this system also experienced harsher rides. Normal railcar vibrations and shocks would be transferred from the railcar through the chains and into the vehicles, often resulting in hidden damage to the vehicle underframes or suspension and steering components.

In the late 1980’s the auto manufacturers issued a challenge to the rail industry to design a securement system that used the vehicles’ own suspension to absorb the vibrations and shocks encountered during rail shipments, thus providing a better ride quality for their vehicles. Automotive manufacturers led the effort for developing new systems by setting down guidelines for vehicle transport.

Tri-level systems were adopted first, with straps or harnesses that covered the tires during transport. Although somewhat effective in securing vehicles, auto manufacturers recognized that this type of system compromised some of their ride quality objectives, so they began looking at developing bi-level systems with a “clean-sheet” wish list of system characteristics. The system that best satisfied their auto-securement needs would have to meet several requirements: 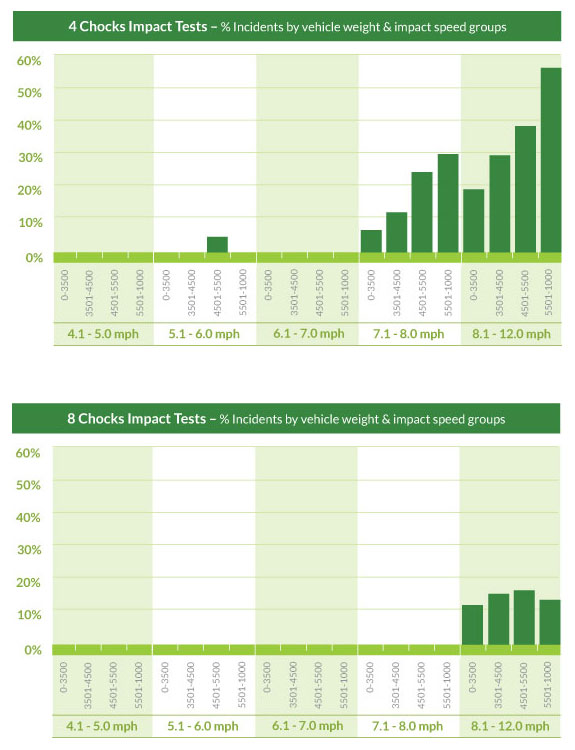 A rigorous program of testing and development began to ensure that the Grate-Lock Chock System was a viable solution for shipping vehicles rather than using chain tie-down securements.

The durability of the system was proven with accelerated life cycle testing designed to show that each component, as well as the final assembly, were sufficiently strong enough to withstand use and environmental exposure over a an extended life cycle.

Historic field investigations showed that the vast majority of chock and vehicle damage occurs during over speed impacts. Numerous impact tests were completed to validate the Grate-Lock Chock System’s performance. As a result, we developed an extensive expertise in the dynamics of vehicle and chock behavior, both over-the-road, and at excess impact speeds.

Each testing phase produced learning that then resulted in the application of key system improvements.

The results: under normal operating conditions, the durability and accelerated life cycle testing showed that the Grate-Lock Chock system could be expected to last for over 20 years!

Introduced in 1993 as the system to consistently secure any type of vehicle being produced and shipped by rail. By the late 1990’s the Grate-Lock Chock System became the industry standard for auto-securement on bi-level railcars.

Numerous series of impact tests involving thousands of impacts since then have proven that the Grate-Lock Chock System’s design would always exceed the requirements set forth in the original system challenge. 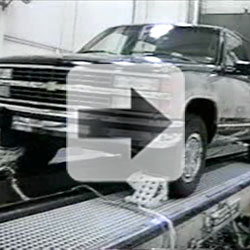 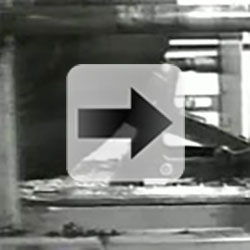 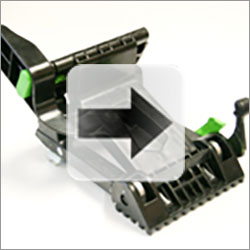 In 1993 the Grate-Lock® Chock system introduced. 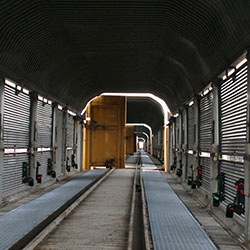 There had been some improvements in railcar handling but the introduction of new generations of vehicles such as SUVs, crossovers and taller sedans, together with larger and more versatile pick-up trucks resulted in heavier vehicles with a higher center of gravity and a redistribution of weight toward the rear of the vehicle. At the same time, vehicle designs were exhibiting a reduction in wheel well clearance.

As a response to this, we developed the Block-Chock, designed to minimize the effects of over-speed impacts. This supplementary vehicle restraint system could be used in conjunction with our existing Grate-Lock Chock System. Four Grate-Lock Chocks were positioned in the typical outboard location, and four one piece, non-adjustable Block-Chocks were placed inboard of the front and rear wheels.

When the railcar experienced over speed impact conditions the leading wheels would climb to the point of almost going over the front chocks. The trailing Block-Chocks would come into play and “catch” the vehicle just prior to the jump over point, thus containing the vehicle in its original chock securement area. The success of this 8-chock securement system proved to be a crucial design breakthrough for the challenges ahead.

As a pro-active response to an increasing industry-wide problem, Holden America has designed and successfully tested a new grating theft prevention system for bi-level autorack rail cars. Beginning in Fall 2017, Holden’s Grate-Guard will be available for installation on new rail cars, or it can be retrofitted to install on existing autoracks.

“We saw that a lot of bi-level autoracks were being held out of service due to grating theft and decided we needed to prevent this from happening to our customers.” stated Jim Schmidt, Director of Manufacturing and Field Operations of Holden America.

The Grate-Guard Theft Prevention System provides insurance against theft for rail car owners. “When you weigh the cost of autorack grating replacement and the associated out-of-service time with the cost of installing this theft prevention system it’s easy to see the value in the Grate-Guard System.” noted Bruno Pietrobon, President of Holden America.

You can specify installation of the Grate-Guard Grating Theft Prevention System when you order equipment or contact us to order the system for your existing rail cars.